TTI, Inc. in Maisach-Gernlinden faced the problem that its autonomous mobile robots (AMR) from Mobile Industrial Robots (MiR) and automated guided vehicles (AGV) from BILA A/S could not operate in an environment with shared travel paths. As a consequence, the robots were blocking each other which led to reduced uptime and efficiency losses. The TTI, Inc. project team around Tassilo Matthes and Gökan Yilmaz was looking for an intelligent solution to this problem.

"It is only due to WAKU Sense that we are able to let mobile robots from different manufacturers drive in the same areas and aisles. The intelligent area limits enable us to regulate traffic in order to operate mixed traffic safely and efficiently. This gives us a wide range of uses for the AGVs and AMRs, enabling us not only to achieve huge cost savings in our receiving department but also to ensure our overall growth target of 10% per year." - Tassilo Matthes, Supply Chain Program Manager 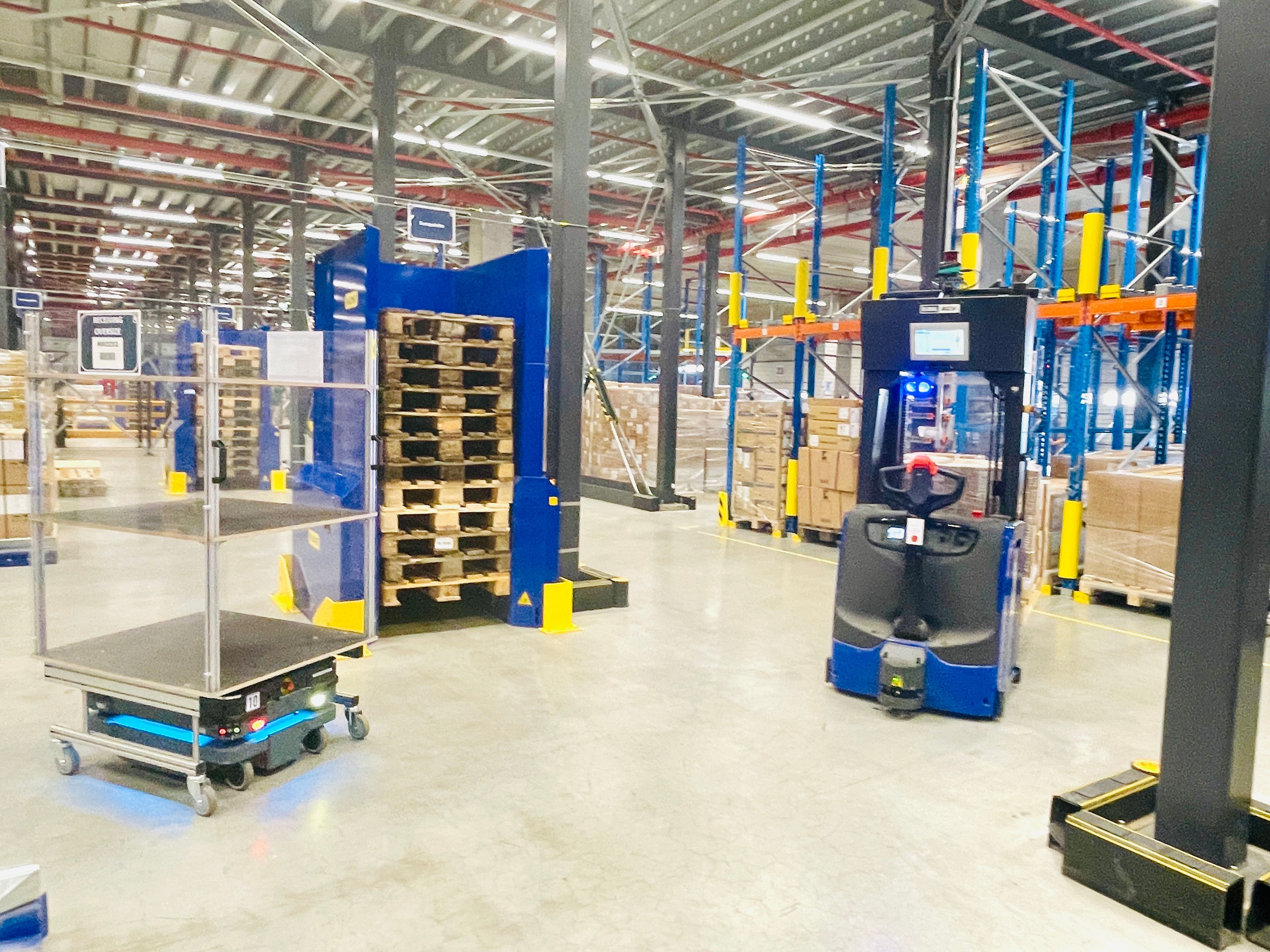 TTI, Inc. Europe, a Berkshire Hathaway company, is a world-leading specialist distributor of passive, connector, electromechanical, discrete, power, and sensor components. They serve the European market from its European headquarter in Maisach-Gernlinden. The specialty distributor uses 42,000 m², of warehousing space and ships 2.75 million products annually. Due to the sharp increase in demand for microelectronic components, TTI, Inc. is facing a new challenge. On the one hand, TTI, Inc. wants to continue to provide superior service to its customers and deliver products on time, every time. On the other hand, the shortage of skilled workers in logistics is clearly noticeable. Repetitive and physically demanding tasks are to be performed primarily by autonomous systems in order to relieve shopfloor workers.

Therefore, TTI, Inc. decided to integrate 12 AMRs from Mobile Industrial Robots and three driverless forklifts "Global AGV" from BILA A/S in the goods receiving area. These mobile robots provide support in transporting materials over long distances. The design, procurement, and installation of the mobile robots were handled by the automation experts from JUGARD+KÜNSTNER. In addition, JUGARD+KÜNSTNER manufactured individual racking systems for five MiR 250, enabling goods to be transported autonomously. The three Global AGV driverless forklifts (type L14) are used in the goods receiving area, where they quickly remove full loads. 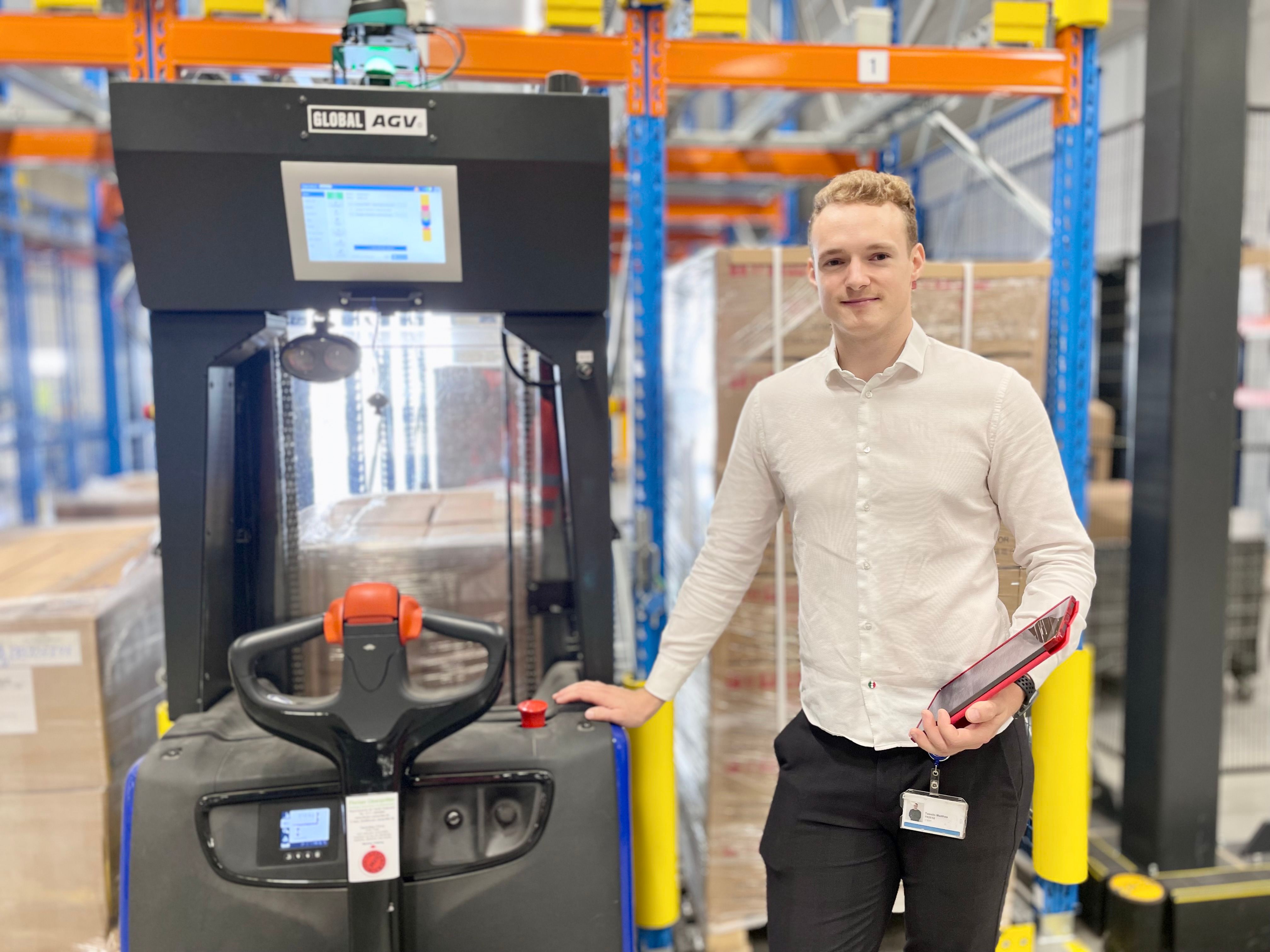 By deploying a mixed fleet, TTI, Inc. encountered an unprecedented challenge. Initially, it was impossible for the two robotic systems to operate in a shared environment without problems. The systems were blocking each other on the shared travel paths, as a result, they were unable to continue their missions. The problem had to be solved manually by a shopfloor worker. It was also unclear where the robots were in the warehouse since there was no real-time visualized data to locate the vehicles. In some cases, a robot was searched for by employees on the store floor when it ran out of power due to an empty battery.

In addition, each robot system had manufacturer-specific robot operating software. Consequently, employees had to deal with two very different user interfaces. It was difficult for employees to measure the actual performance and utilization of the robot fleet on the scale of things Accurate data analysis and evaluation were very time-consuming for the Supply Chain Program Manager, Tassilo Matthes. There were only a few key users who could operate the robots and correct any errors that might occur. 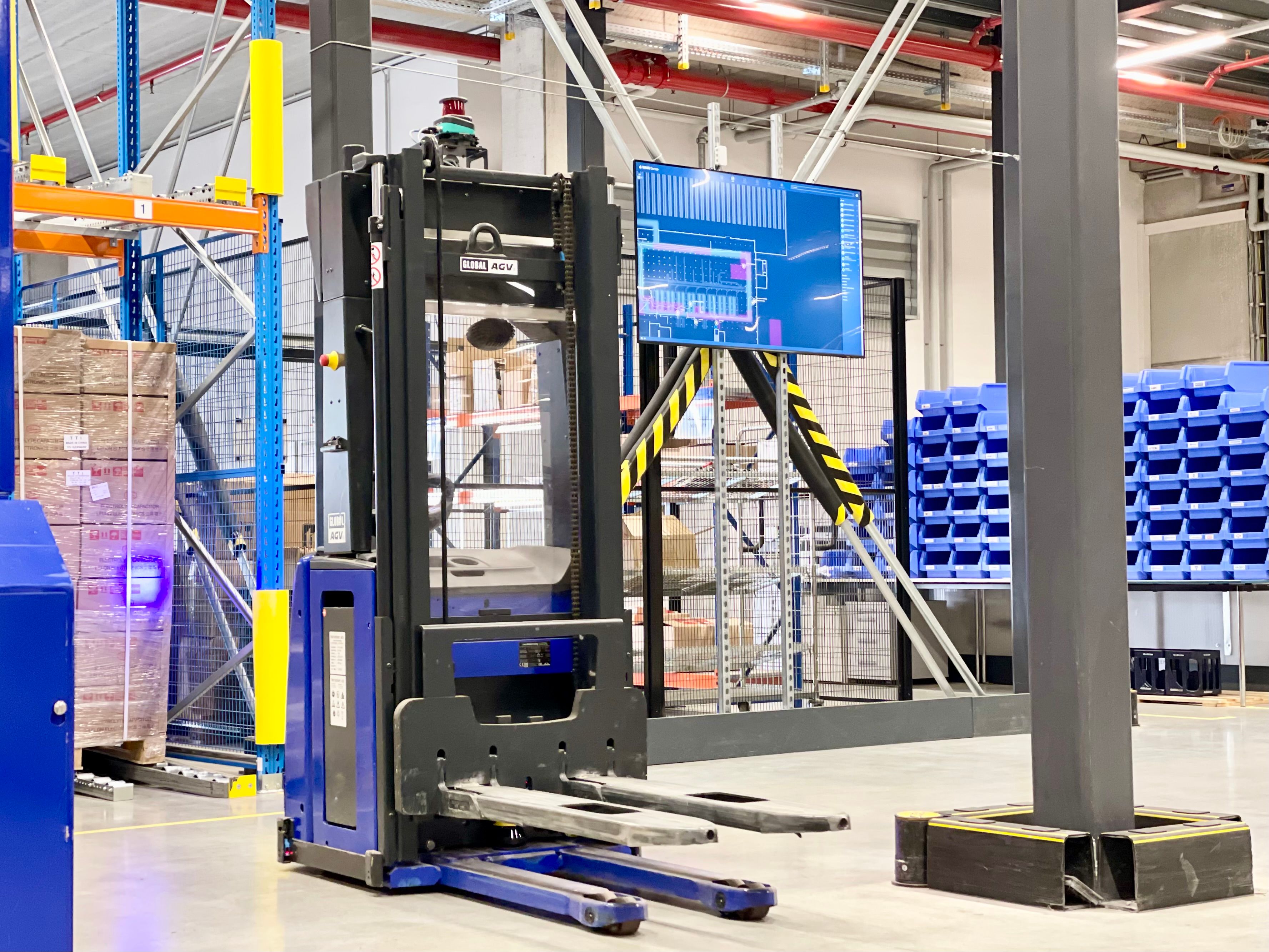 TTI, Inc. was researching a solution to enable a smooth operation of the two robot systems on shared travel paths with minimal effort and to achieve higher utilization. They were looking for a centralized tool with an intuitive user interface to optimally control and monitor all robots. The distribution company decided to use WAKU Sense on the recommendation of JUGARD+KÜNSTNER and invited our team to Maisach-Gernlinden for a first meeting.

"Our employees were able to quickly learn using WAKU Sense and understand the value it adds to us. The feedback from employees on usability is quite positive: WAKU Sense is intuitive to use, navigation is easy, and the technical presentation is flawless." - Tassilo Matthes, Supply Chain Program Manager 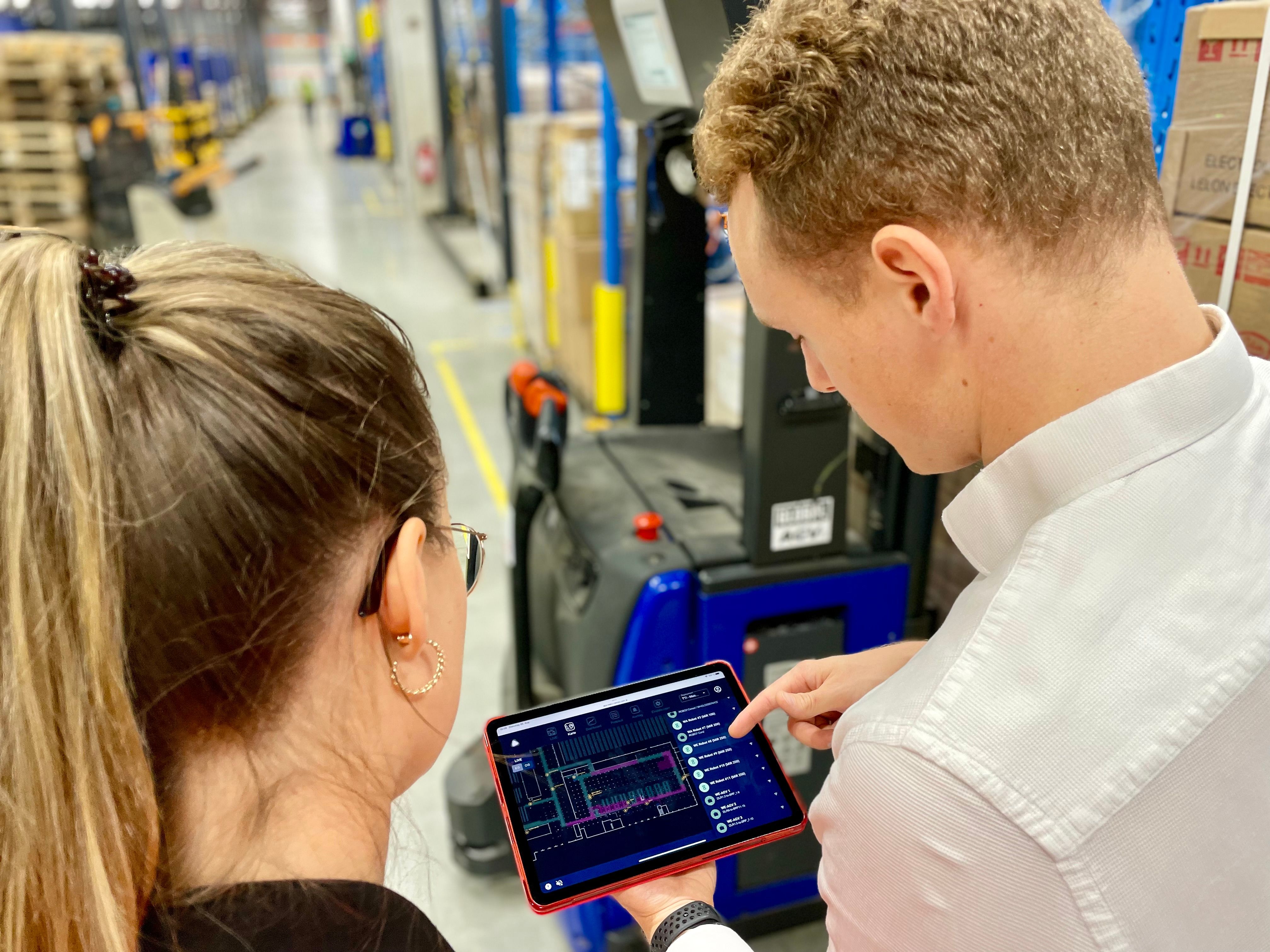 In August 2021, the first meeting took place at TTI, Inc. A joint workshop on the current challenges was held. First insights, thanks to the analytics module of WAKU Sense, were generated. Subsequently, a roadmap of topics was developed with the first step "dashboards with process data" to successively solve the traffic problem. WAKU Sense was jointly installed with the IT department of TTI, Inc. for MiR's robotic systems. The integration of the Global AGVs was a bit more difficult at first, as the associated software interface did not contain all the required data points. However, this problem was solved after a short time in coordination with the robot manufacturer and the driverless forklifts were integrated.

A development partnership was formed between TTI, Inc. and us. Regular telephone and video calls as well as on-site visits were conducted to continuously improve the stability of WAKU Sense and to develop further useful features.

Why it was a success

"Safety in internal operations is elementary for us. Through WAKU Sense, we have managed to display warning signals audiovisually and avoid collisions between AGVs and AMRs in conflict zones. As a result, more missions can be triggered and we can increase utilization significantly." - Gökan Yilmaz, Process Manager Operations Europe 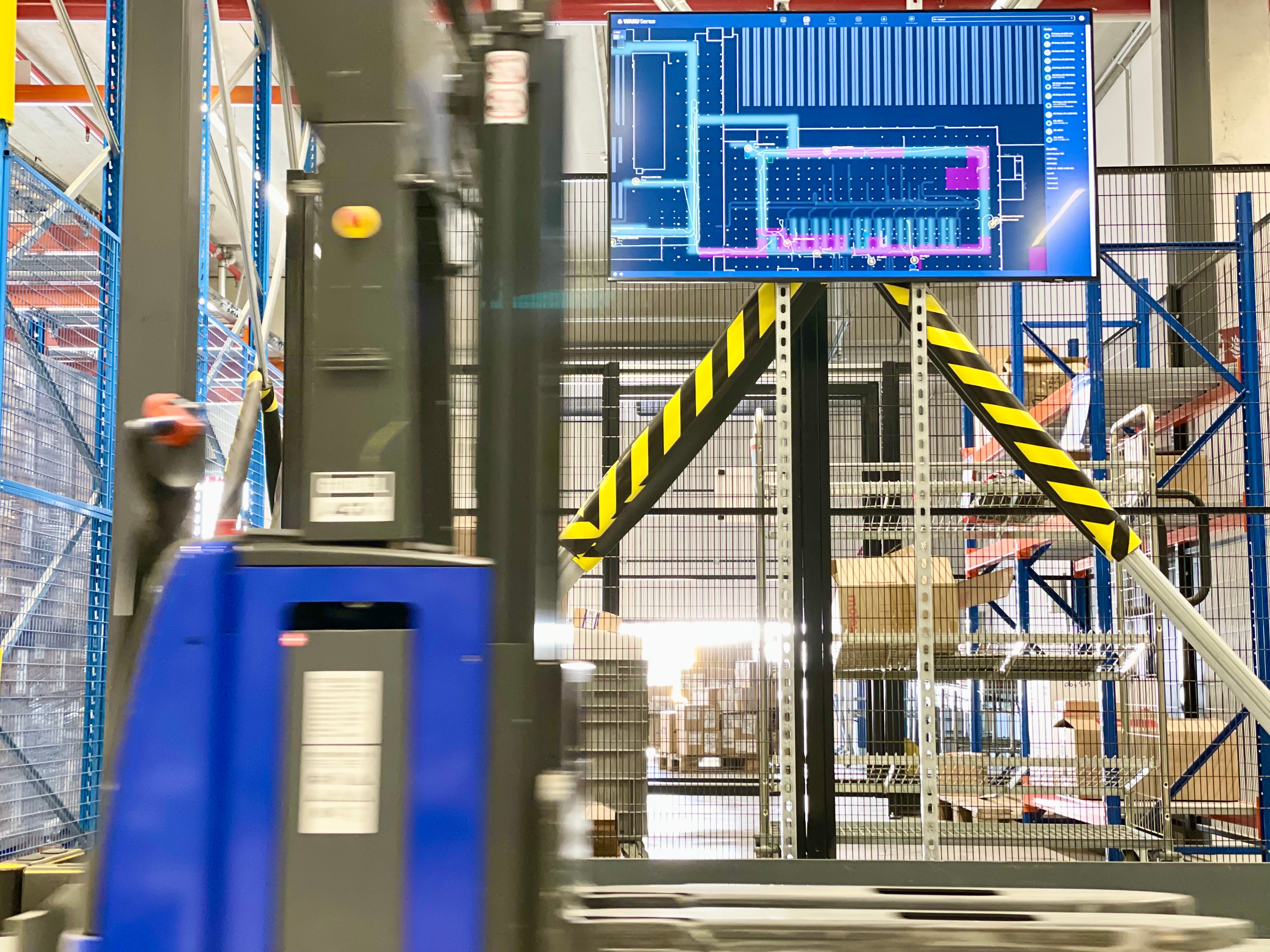 With the installation of WAKU Sense, MiR and Global AGV's mobile robots can safely share common travel paths in one environment and work seamlessly together through efficient Traffic Management. WAKU Sense offers a feature called Area Limits, which allows users to define zones where only one robot is allowed to be in order to prevent collisions. Thanks to WAKU Sense's intuitive user interface, the Robot Operator - a role newly introduced by TTI, Inc. - can independently draw the Area Limits on the Live Map. The mobile robots can now be used for multiple use cases, significantly increasing utilization. 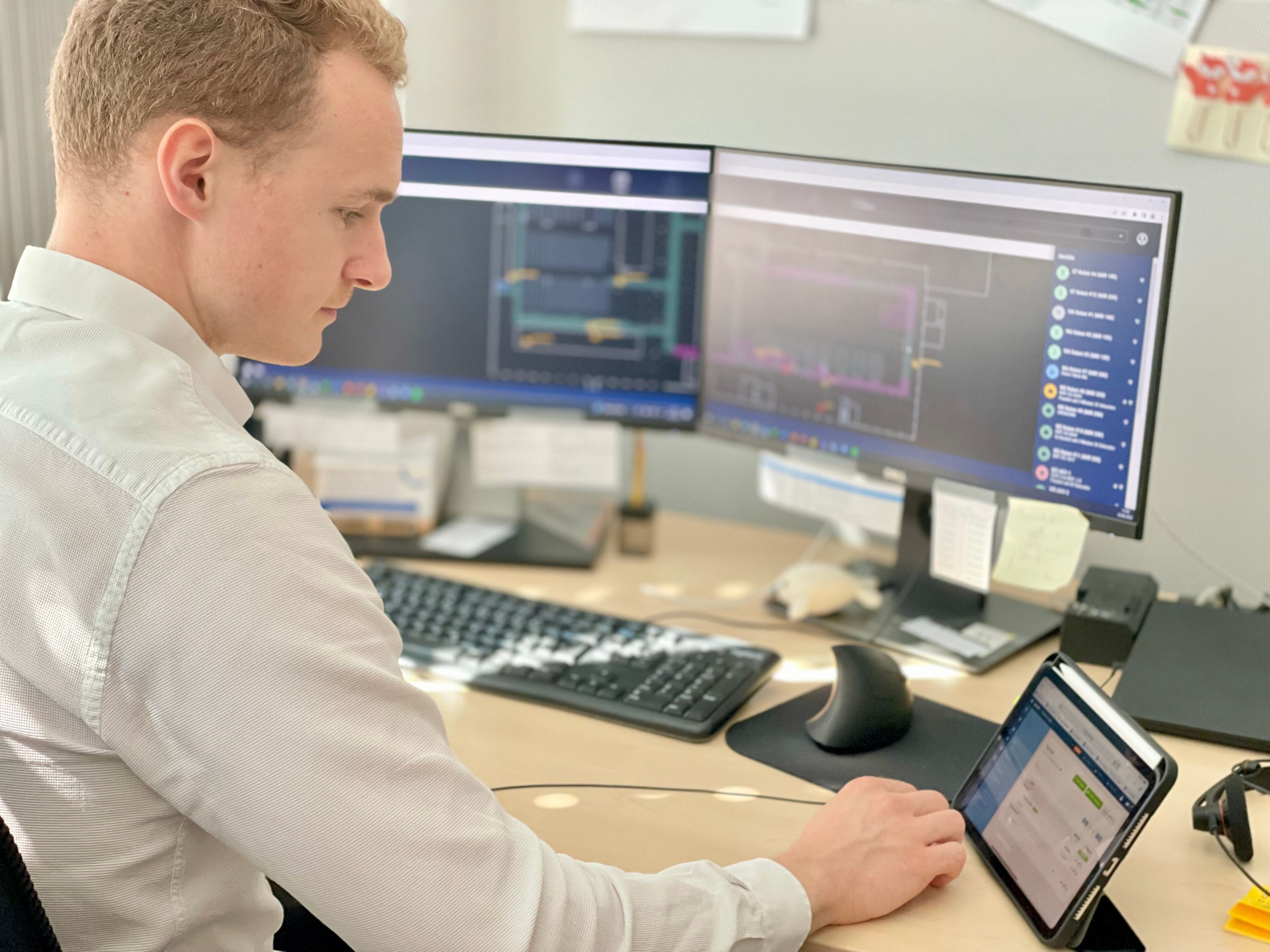 The entire robot fleet is visible to all employees on the shopfloor through WAKU Sense. The live dashboard maps real-time data that informs about the current status of the individual mobile robots, and thus supports the transparency of the processes. Through Process Analytics TTI, Inc. can easier analyze, evaluate and understand processes. TTI, Inc. intends to continue investing in automation and integrable robotic systems as it continues to realize its vision of a smart warehouse.

With WAKU Sense, we enable our customers to realize the full potential of their mobile robot fleet. Our customers use the software-as-a-service product to efficiently manage and analyze the traffic of mobile robots from different manufacturers within warehouse and production environments without replacing the robot operating software of the robot manufacturers. Thanks to an intuitive user interface, custom traffic rules can be easily defined. WAKU Sense ensures the interoperability of robots and manual vehicles, i.e. the ability of devices from different manufacturers to reliably interact with each other. For more information on WAKU Sense, visit www.waku-sense.com.

Would you like to test WAKU Sense by yourself? Then use the contact form and we will send you an individual demo version for free. The experts at WAKU Robotics will be happy to help you get started with mobile robots!

WAKU Robotics supports you in choosing the right robot for your application. We take care of the procurement of the robots as well as the on-site test. Our WAKU Sense software helps you to operate the robots across manufacturers and to analyze the processes.